NOTICE OF NOMINATION AND ELECTION OF OFFICERS OF LOCAL UNION 96

Click here to view or print the notice of Nominations and Local Union Election.

Nominations will be accepted at a Special Membership Meeting of Local Union 96 to be held on October 19th, 2021 at 6:00pm. The meeting will be at the SPX Building Corporation, (Knights of Columbus) 3611 Stewart Road, Forestville, MD 20747. 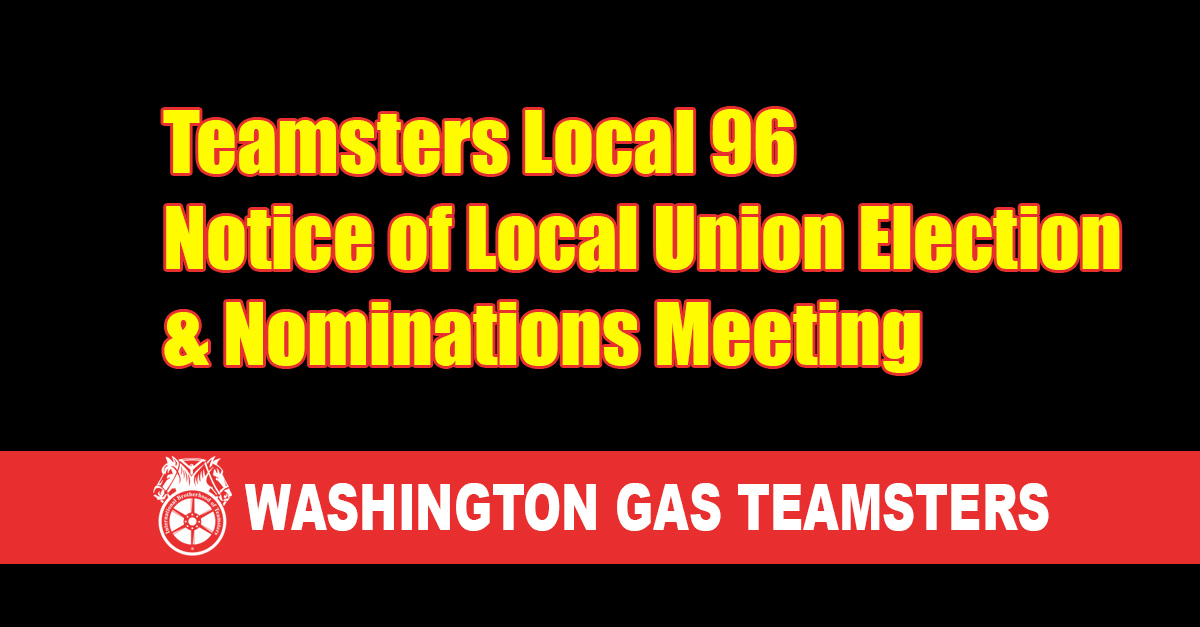 Notice is hereby given of the nomination and election of the following officers of Local Union 96: Secretary-Treasurer (Principal Officer), President, Vice- President, Recording Secretary, and three Trustees (and elected Business Agents, if any). The terms of office for these officers will commence on January 1, 2022 and conclude on December 31, 2024.

NOMINATIONS: Nominations will be accepted at a Special Membership Meeting of Local Union 96 to be held on October 19th, 2021 at 6:00pm. The meeting will be at the SPX Building Corporation 3611 Stewart Road, Forestville, MD 20747.

ELIGIBILITY TO RUN FOR OFFICE: To be eligible to be nominated for Local Union office, a member must be in continuous good standing in Local Union 96 and actively employed in the craft within the jurisdiction of the Local for twenty-four months prior to the month of nomination. “Continuous good standing” is defined as compliance with the requirements regarding the timely payment of dues, together with no interruptions in active membership because of suspensions, expulsions, withdrawals, transfers or failures to pay fines or assessments. A member on dues checkoff will not lose good standing as a result of a delay or default by the employer in sending dues to the Local or because of an employer’s failure to make the proper deductions from the member’s pay in any month in which the member had any earnings from which deductions could have been made. Potential candidates are encouraged to check their eligibility, and the eligibility of their nominators and seconders, prior to the nominations meeting by submitting a written request to the Local Union Secretary-Treasurer.

ELECTION: The election will be conducted by mail ballot. Ballots will be mailed to all active members and new applicants eligible for membership in Local Union 96 on or about November 15th, 2021. All ballots must be received at the designated Post Office Box by 4:00 p.m. on December 20th, 2021 to be counted. Members who have not received a ballot by November 27th, 2021 should call the Local Union Office at 240-619-3151 to request a ballot.

Duplicate ballots may be requested through December 13th, 2021.  Instructions for the completion of the ballot will be enclosed in the ballot package. This is a secret ballot vote. You should mark your ballot in private and mail your ballot, sealed in the secret ballot envelope, to the designated post office box in the postage paid Business Reply Envelope provided. Do not give your ballot to anyone.

ELIGIBILITY TO VOTE: To be eligible to vote in this election, a member of Local Union 96 must be in good standing with initiation fees and dues paid through October 2021. Members have until 3:00pm on November 14th, 2021 to pay their initiation fees or dues at the Local Union office in order to have their votes counted. Under the International Constitution, any member on dues checkoff shall not lose good standing as a result of a failure by an employer to send deducted dues to the Local or to make a proper deduction from the member’s pay in any month in which a member has any earnings from which dues could have been deducted.

If you have any questions or have if you have recently moved, please contact the Local Union 96 Office Manager by calling 240-619-3151.